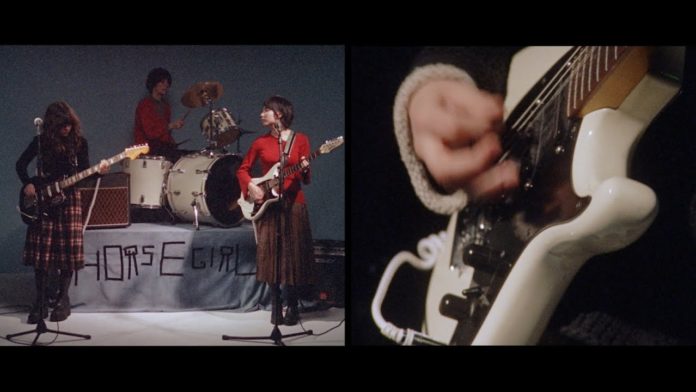 Collectively, the representatives of Horsegirl are likely 20 years younger than their most recent impact. Georgina Reece and Nora Cheng are undergrads, Penelope Lowenstein a high school senior, but Versions of Modern Performance shine with the sleepy warmth of 30 years ‘worth of indie rock. Relative to your era, you might understand Yo La Tengo or Stereolab in the featherlight solos; maybe the lardy, crayon-streaked guitarist Dinosaur Jr. J Mascis or Built to Spill? Doug Martsch. The longer you hear, the more the album mimics an investment labyrinth made from acquainted citations — the sigh of the twofer bar on “Bog Bog 1” My Bloody Valentine, whereas Cheng’s seagull contact with a ballad on “Beautiful Song” provokes Laetitia Sadier. Unless a group of youngsters collected a few of those guitars to create a foggy guitar, satiating audio anywhere in the past eight administrations, you will understand they’re resounded here.

Horsegirl are successful representatives of a primarily preteen Chicago indie scene, and their breakthrough emerges adorned with advantageous consigns from episode seniors — John Agnello (Dinosaur Jr, Sonic Youth) to the back of the panels, whereas Steve Shelley and Lee Ranaldo perform on “Billy” and “Beautiful Song.” It’s a praise, after which the, to speak the said Versions might have arrived out in 1997, or 1987, since that’s entirely the point. The Grunge stone of this epoch had been loose-fitting, and in order to make it work, everybody has to play that way — cuddling the douglas excessively snugly will indeed liquefy the atmosphere, as would an overly crowded backbeat. The audio does have to be pushed, like a pup in the solar system, or you are not doing anything right. Lowenstein, Chen, and how commerce outspoken duties are combined with acoustic guitar and six-string electric bass, modification of grime tones for pitched bubbles, while Reece strikes the percussion like someone flinging color pails at a cellar. They’ve got the balance excellent — neither blasts, just a stable, anxious attrition constantly interrupting the music’s docile ground.

This haziness provides excellent rainfall to cover the lyricism mysteries, and Horsegirl takes the opportunity. You may have to listen to a little bit of music “The Fall of Horsegirl” half to understand the leash is just Lowenstein tallying silently to 6. “Anti-glory” begin raggedy and chaotic before going to pull coiled for a creon wherein they merely take “Dance!” at you, somewhere they’re throwing sparklers at your feet. “Billy” builds up a good head of steam before speeding up unexpectedly and straying into a spot.

There really are lovely mysteries throughout the Versions, there seems to be no disclosures. From the researched excellence of its acoustic tones to the solos and their meticulously choreographed arrangements, these are a truly captivating collection, Versions is a tad like an apprentice’s masterpiece, they have assimilated their learnings. The songs are fragmented, open-ended, and infrequently apprehending ( “I’m on the road to recovery from the amputated ankle of my brother” (from (,) “Option 8”). But any Capital Statements that Horsegirl might make are probably percolating somewhere in that soupy sound, waiting for the right moment — hopefully album two — when they will emerge. For now, Horsegirl aren’t as much carrying the torch as they are keeping the pilot light lit, low and steady.