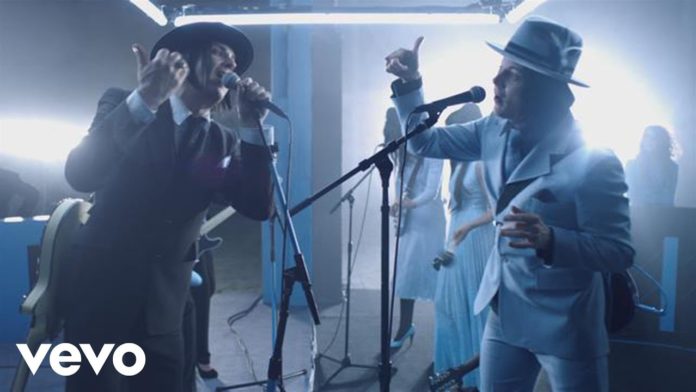 “Taking Me Back” the music that ends Jack White’s fifth solo album, both launched his fourth. The edition on “Entering Heaven Alive”, which headline conveys the parenthetical ” (Gently skewed)” White’s workmanlike take on the gypsy jazz of the 1930s, lively and lilting, finish with a see-sawing melodic vocals by grande St é phane Grappelli to start things off. The previous version, from April’s Fear of the Dawn, is the chimera venue rock, outraged and bludgeoning, layered with synths that noise like synths and synths that noise like synths.

The contrast between The two, illustrates a wider split in attitude between the mellow sound of Heaven and the exciting film tests of Fear, It’s impressive. But is there, therefore, a similarity between them?. At its center, “Taking Me Back” is about as standalone as it receives: Two parts of three or four riffs each, A song often consisting of minor variations on the headline word. Things Captivating, in both compilations, is in the accessories: helpful pauses that quiet, like a group beautifully falling down the stairs, and intentionally rough online clips redolent of “Robot Rock” and Run-D. M. C. On Fear.

This is already White’s manner. With some notable exceptions, the most memorable scenes in his collection are simply not music per puede, but tunes, rhythms, riffs, visual options, as well as a few others. Even the rough-and-ready noise of the soon-to-be-white stripe songs was such an option, though one rated slightly mandatory. His greatest gift was guitar, and his second — leaving aside his skills for self-hypothesis and entrepreneur — may be as something like a maker or an arranger. His words invoke a certain elegance that may seem anathema to his old-school intonations, but it’s real: Even when his music is not at its brightest, He knows how to dress them up just the right way, or, at worst, in a way that makes them a little more entertaining. He carried it competence to the frontline — albeit too further — on “Fear of the Dawn”, on Boarding House Reach, its equally tinkered-over founding, songs with lots of ring and chirps but very few enduring music.

In its area, Entering Heaven Alive suggests a turnaround with that diversity: a stripped-down singer, mark, the almost all music created inside acoustic and percussion. But then you had one, and establishing is a conscious choice. And then there was a time when I thought I’d call you at (Anon) * faiks, the parts that stick with you are not from the food of the music — songs, tunes, chord changes — but the gravy stays on peak of it. Entering Heaven Alive has plenty of fantastic blossoms: The soft guitar-and-synth cut of If I Die Tomorrow “; the elegant lines of a bedia” Help Me Along!. “The handy rack of racks” A Tree on Fire From Within “puts bass in a strange lead role, played high on the head in sync with music.” All Along the Way “handles to slow down from melancholy folk-rock to gliding minor-key ska without experiencing push or colour.

The talent of white as a translator with his own content is evident in such verses, but the content itself only once in a while holds up its end of the deal. “Will I Die Tomorrow” a soft and sensitive showcase, admitting White’s fear he’ll move on before his family and be unable to keep her in his elderly bed. “Help Me Along” is equally nice, attracting on the playful naiveté of “We’re Going to Be Friends!” but updating its stripped-down singalong into stately chamber pop. More often, songs don’t resonate as deeply as sounds. “Love Is Selfish” features some impressive fingerpicking, but its chord changes feel like they’ve been recycled from older songs, stronger White compositions, its lyrics seek wisdom about romantic relationships that they can’t quite grasp. ( “I’ve got a sailboat with her name painted on it/But I don’t know how to sail” goes each especially weird ballad.) The album’s greatest exceptions, “I’ve Got You Surrounded (With My Love)” and “A Madman From Manhattan” are light and funky, and could have just as easily appeared on “Fear of the Dawn”. They spend their rhythms on ephemeral polemics with the former and near-nonsense kitsch defeat lyrics on the latter.

White authored and noted “Entering Heaven Alive” in trio with Fear of the Dawn, but he has placed them as yin-and-yang buddy items. Your choice of fave between them will probably come down to whether you prefer White the sincere songwriter or White the utopian supervillain. For me, Heaven endures because its setup carries a configurational mass that the music only does; Fear has a brighter feeling of itself as a collection of clean diversions. In the current consequences persona, White has said he’s not interested in producing for other actors, It is a little pity. E, it is straightforward that he still understands well how to create a warm history. But it would not function if anyone else was composing the music.