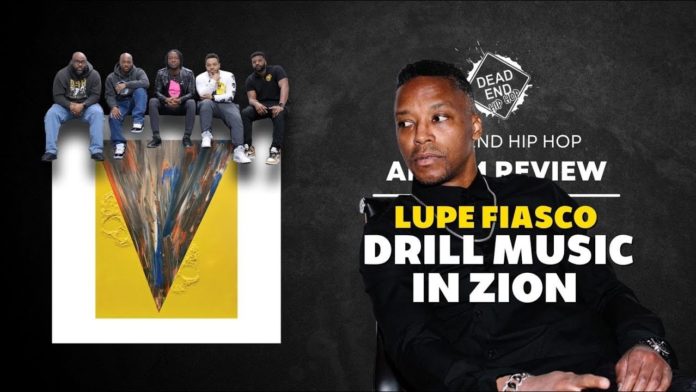 Sometime after 2011’s Lasers, Lupe Fiasco the excitable professor conquered Lupe Fiasco the songwriter. Instead of a high-conceptual, available songwriting, of his early days, The emcee has scrapped efforts to promote public consumption, As a result of the exhaustion of Chicago crime, brand fighting, creative negotiations. Started with 2012’s Food & Liquor II: The Great American Rap Album, Pt. 1, his songs become so condescending and clunky but they were melodic sanitised, with grand ideas being repressed by subpar operation and basic producer. Basically, the music started to represent the needed hearing for those heavy-handed lesson plans.

Lupe cleans up on Drill Music in Zion, a precise endeavor that encapsulates his better leanings with a spotlight invisible in years. Focused on heartfelt representation, labyrinthine bar, and high-wire wordplay system, Drill Music in Zion is Lupe at his most effective. A mixture of ambient music that conveys solitude and precision, compliments of Soundtrakk producers and Lupe himself. 10 songs, the LP is the quickest of his job, and the length aids: Instead of focusing on overall ideas he doesn’t provide settings for, his attitude is much more ephemeral. He bends into his abilities soon on, and it saves him from the catcher of tedium, Quaternion, and self-seriousness.

Along with prosodic satisfactions, Lupe’s best talent is his ability to lace diverse thoughts into clay metaphors. On “Ghoti” he links a Christopher Columbus benchmark, supervillains, and Neuralink tech for a spacious yet concise relaxation on neoliberalism, Ethics, and the honesty of scientific advancement. With the gentle draught of a sand “Precious Things” Lupe receives playful and deep affection, a narrative about broken camaraderie and commitment: “Cute scissors on my paper, not on the same page/We bat, catcher, and pitcher, now you don’t even wave it.”

Lupe remains to publicize his skill for narration on “Ms. Mural” the final entry into his “Mural” trilogies. On the track, one painter’s conversation with a condescending customer becomes a rumination on Lupe’s fraught relationship with the music industry. It’s personal, but it’s also an existential study for artists everywhere.

Lupe Sometimes swaps elaborate words for exposition and blunt force, with mixed success. It is most effective in the subdued production of “On” Faux Nem which offer a foundation for Lupe’s simple, a clear declaration: “Rappers die too much/That’s it, that is the passage.” From there, he unleashed a searing bar about the culture of drill music. In a world where authenticity is typically valued above all else authenticity is not a luxury, he wishes that drill artists were actually lying in their lyrics.

Lupe’s conversational technique feels a little strained on a tense subject “Kiosk” where he raps from the perspective of a tricky seller trying to sell jewelry to aspiring high rollers. It’s OK to, until he lapses into a spoon-feeding third verse that veers off topic. The track is part of a three-song run ( () “Precious Things” to “Ms. Mural”) where beats and one-note tonal inflections melt into each other, rendering a drab slog of colorless sounds.

While the production on Drill Music in Zion is cohesive, the production is also well-balanced, it’s not the most adventurous. There isn’t the futuristic psychedelia of “Just Might Be OK” or the euphoric escapism of “Kick in the Kicker, Push” here, no one song matches the widespread appeal of Lupe’s best work. Still in a state of flux, the overall impression makes up for that lack of dynamism; The understated tracks give his intricate riddles room to breathe and Drill Music in Zion gives Lupe’s humanity and command of language plenty of space to exhale.