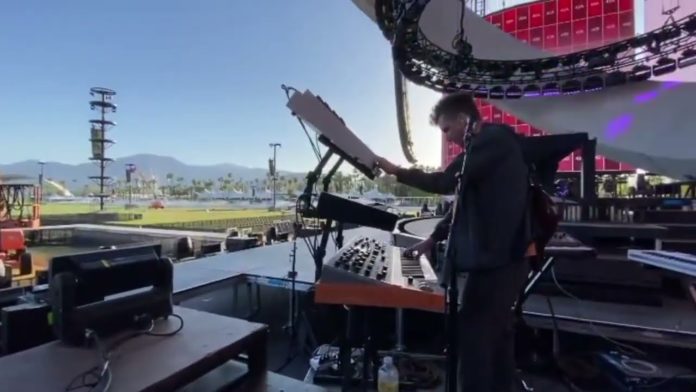 Mike Dean is a man with few speech, allowing his song do the speaking on music he’s created for himself — including his 2021 music “4: 22” and for others, incl Beyonce, Kanye West the Weeknd — and how he’s now starting to shine on the show “After Hours Til Dawn!” stadium tour — and his just-released listing, “See You Next Year!.” Oh, and the occasional social media post, for Wednesday night’s small drama involving his obvious separation from Kid Cudi’s Moon Man Landing Festival in Cleveland next month. Dean was the author of the book, “Looks like I won’t be playing moon man’s landing this year. Someone cancelled me. Lol. Thanks. That’s all!. # immature” eventually introducing “No Comments.” He both replied to fans’ Twitter issue about postponing the day of society “lol. No one can cancel me like that! Just some baby kid baby shit!.” It may appear that the festival is probably related to Cudi’s current dropout from his former friend and producer Westwood, who then Dean worked with carefully, if twice controversial, for about a century. But as predicted, Dean had little or no comment on the scenario as he engrossed with Variety this week from Tampa, where he was preparing for his opening-slot production on the Weeknd Journey, which has been described as an “improv synth set.” “My stuff is a good build-up for The Weeknd’s set, I think!” stated Dean, and how the singers played songs from his songs “4: 20” and “4: 22” among other things, extra lyric songs from the Philadelphia Journey lineup. “It’s a great synth song to just get folks in the tone for the display. And also, the modern improv things I’m attempting to play in concert, I’m going through all this and see what I can update on.” Calling the opening slot and the tour “Week 101” ( “a delve into his song and most of its features”), he is looking forward to growing his musical relationship with his tourmate Dean. During the journey, I made my a few friend requests, The HBO show is coming, “The Idol” and his producer of Weeknd song, Dean says this would probably be the closest connection he’s had with another composer. “I do think that we’ve truly bonded during this tour.” When Dean isn’t improv song on the venue, He’s playing new music on his latest tour, a “very cool” car that “allows me to record the space, mix and master anything I want, when I want to. That said, I look forward to getting back to my own studio and getting an even newer computer, bigger bus I can fully equip, rent out to other producers and pick my own locations to record.” Make contact Before you start a project, Dean has been filming images from the movie “The Idol” The Weeknd’s still-in-production fresh HBO dramedy “Euphoria” maker Sam Levinson and co-star Lily-Rose Depp. “I can’t really talk about it” Dean chuckled. “But I am in the trailer where you can see me hitting my bongs. So I’m definitely smoking weed on the show. That’s all I can say.” He declined to discuss working on Beyonc’s upcoming album “Renaissance” or the six songs he had a take on as a maker, Program, synth participant or beat, including the shaking “Summer Renaissance” with its linearization of Donna Summer’s “I Feel Love.” Dean did manage to contact Bey “Queen of Rhapsody” before speaking he could speak extra. What he could talk about was his various artists’ music, “See You Next Year” which dropped today. Dean produced music in partnership with the music discovery location Pigeons & Planes and the creative agency/record label Big Blues. Face. Children (with delivery through Warner/ADA). The music includes such up-and-coming singers and artists as Brevin Kim, Baird, Fana Hues, Dreamer Isioma, Ecstastacy, Terry Presume, Redveil, Wallice, Ben Reilly, Sash and Teezo Touchdown, along with other filmmakers. “I wouldn’t necessarily call what I’m doing with those artists ‘mentorship’ or ‘curation’, ‘” told Dean. “I knew the guys from Pigeons & Planes — they’ve been covering my stuff for years and were working on a compilation. I didn’t have a strategy towards doing songs or creating a CEO, but it was an item.” this thing includes a new Dean instrumental, “Business Class” as well as such fresh productions as “Oz” with Sash and “Loner” with Terry Presume. “Sash is a true singer” Dean says. “I think he has growth potential as an artist and I’m going to continue working with him for some forthcoming data. I like most of the actors in the box, tho.” Dean Compares “See You Next Year” and possible follow-up sets to XXLmagazine’s annual “Freshman Class” lists the top 10 up-and-coming rappers. “If you did take that something and created it it not entirely music, introduced in R & B or music, that’s what this would be. It’s great, wider ranging.” He adds, tantalizingly, “I’m already working on my own upcoming compilation of known books, Big artists and friends — pretty much everyone I’ve ever produced. I’m trying to get that together now.” And obviously, He brings a chuckle, “No — I can’t say who, yet, will be on my album.”.